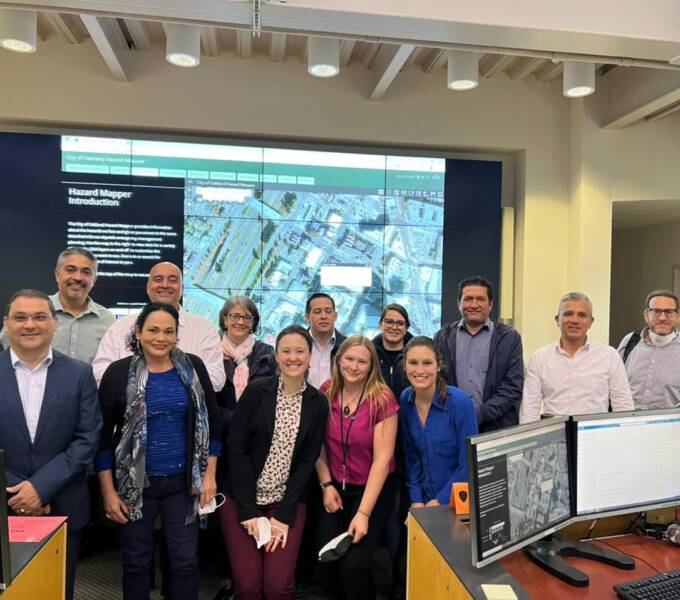 Last week, a delegation of disaster and engineering authorities from San José, Costa Rica met with key disaster agencies in Northern California for an exchange on risk reduction and response strategies. California is widely considered a global leader for disaster risk reduction, particularly related to earthquakes and fires, and the delegation explored existing programs for structural damage assessments and community response volunteers.

“The objective of the visit was to learn how damage assessment systems work in places that have previously confronted large-scale disasters and have responded well, so best practices may be incorporate into national systems in Costa Rica. The visit achieved the objective and went beyond, providing a broader view on key challenges in emergency response and different ways they have been addressed,” said Diana Ubico, Regional Advisor with Miyamoto International.

Between April 19th and 21st, the delegation meet with Collaborating Agencies’ Disaster Relief Effort, local government and the American Red Cross in San Jose, California; the U.S. Federal Emergency Management Agency – Region 9, headquarter in Oakland; the Oakland Department of Emergency Services; the Center for Catastrophic Risk Management at the University of California-Berkeley; and, the Governor’s Office of Emergency Services in Sacramento.

Participants in the delegation included representatives from Costa Rica’s National Emergency Commission, the Ministry of Housing and Human Settlements, the Ministry of Health, the Mixed Institute of Social Aid, the municipalities of San José and Alajuela and the Engineers Association of Costa Rica.

The delegation is participating in a U.S. Agency for International Development program called PREPARE, which increases access to risk data and effective response planning for seismically vulnerable countries in Latin America and the Caribbean. The program includes El Salvador, Guatemala, Mexico, Colombia, Ecuador and Trinidad and Tobago, in addition to Costa Rica. The exchange was led by international engineering and disaster management firm, Miyamoto International, which is headquartered in West Sacramento with 25 offices located in disaster-prone regions throughout the world.

“It was a high-level technical exchange. The different levels of emergency response were described with great detail, from the local to the federal, and that shows clarity of the total scenario of action,” said Marcial Rivera from the Engineers Association of Costa Rica.