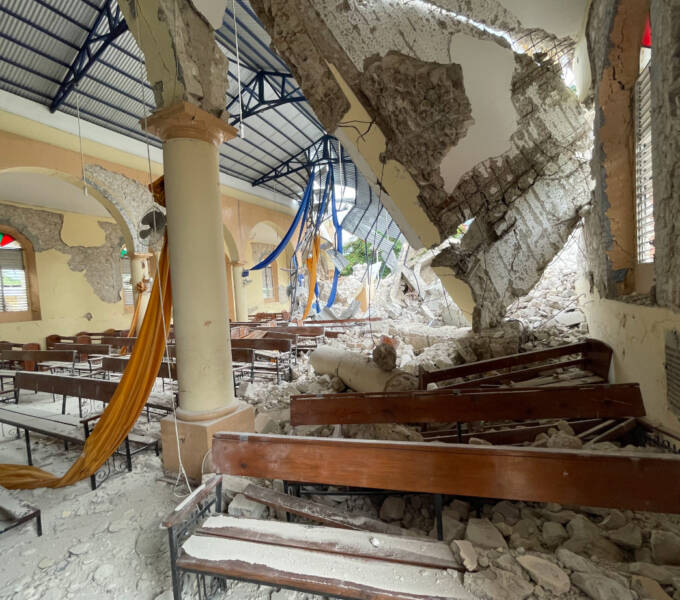 Sabine Kast is the Director of International Programs for Miyamoto International, a multi-hazard engineering firm with an office in Port-au-Prince, Haiti that has responded to 100+ disasters around the world.

More than a hundred-and-thirty thousand families lost their homes on August 14, when another massive earthquake struck Haiti. Thousands died, and yet news of the tragedy was soon drowned out by the withdrawal in Afghanistan, flooding in Tennessee, and Hurricane Ida wreaking havoc in New Orleans. Unfortunately, media coverage plays a key role in how much funding is pledged by international humanitarians, and Haiti is in desperate need amidst a declining economy, increased political and social instability and a migration crisis. The reality is that of the 650,000 people affected, most will not receive any aid at all. As a member of the response teams on the ground in both 2010 and 2021, here are lessons I’ve witnessed that bring me hope for the Haitian community’s own capacity for recovery and resilience.

Haiti is better prepared today than ever before.

Within a week of the earthquake, the Government of Haiti established an emergency operations center in the capital to coordinate response operations with an operations center in Les Cayes, the largest city in the affected area. Unlike 2010, where leading engineer Reginald DesRoches described the situation as a “leadership vacuum” filled and controlled by the international community, all agencies are now coordinating with the government through a U.N. cluster system, which delegates all responding actors by priorities, such as food, water or logistics.

Another example is the improvements in damage assessments. In 2010, it took four months to deploy the first engineer to the disaster zone, but one of the world’s largest assessment programs launched, which trained 200 engineers to assess over 400,000 buildings. Since then, ongoing trainings help certify engineers in standard assessment methods and a mobile app in preparation for a disaster like this. As a result, this year the government was able to mobilize 50 engineers within a week, and an additional 150 within a month.

As the COVID pandemic unfolded, what many of us sought most was information. Similarly, in the aftermath of an earthquake, when walls are lined with cracks or buckling with damage, Haitians need information about their safety. In the last month, engineers visited houses, schools, churches and infrastructure, painting tags according to their safety: red (unsafe), yellow (restricted entry) or green (safe to enter). This gives the government quick information on where to send aid and how many people are displaced. Above all else, house-to-house visits give families the relief of knowing if their home is safe to live in.

While the 2010 event was an urban earthquake, this August’s earthquake primarily affected rural communities. The inaccessibility and disconnectedness of rural populations in southern Haiti has limited the disbursement of aid and prevented engineers from reaching remote localities. Many villages are only accessible by foot, but then where will the visiting engineers sleep?

Despite these challenges, the tenacity of this team of engineers is critically needed throughout these  rural areas, where many families are left to reconstruct their homes on their own. After 2010, extensive trainings for masons helped shift the norms of construction in the capital toward using earthquake-resistant practices. Methods like bending reinforcing steel inside columns to 35 degrees instead of the usual 90 is proven to resist collapse. Funding is needed for construction and engineering programs that not only rebuild houses but rebuild them in inexpensive ways that will save lives in future disasters.

Whether urban or rural, earthquakes are structural disasters and the response from trained Haitian engineers is a remarkable shift from what I saw in 2010. Their leadership will be critical for continued recovery and reconstruction efforts, and I urge the international community to continue reporting on both the hardship and the accomplishments so teams like this might have the resources to reach those who need it most.