Turkey, October 30, 14:51 — An earthquake strikes in the epicenter of the Izmir-Seferihisar, 17:26 km from the Aegean Sea (37.8881 N, 26.7770 E), 16:54 km in depth. According to the statement made by the Boğaziçi University Kandilli Observatory and Earthquake Research Center, the earthquake’s magnitude measured at Mw 6.9.

Our hearts were heavy and we shared the pain of those around us who had just lost their past and future as they now had to watch the remnants of their homes being demolished.

On Monday, November 2nd, a Miyamoto team traveled to Izmir to explore and observe the regions with the most damages and loss of life. On approaching the disaster area, large amounts of personnel from various state disaster relief organizations such as AFAD, UMKE, and Ministry of Health were observed. A number of disaster tents were delivered to the region by AFAD and were in the process of being assembled. 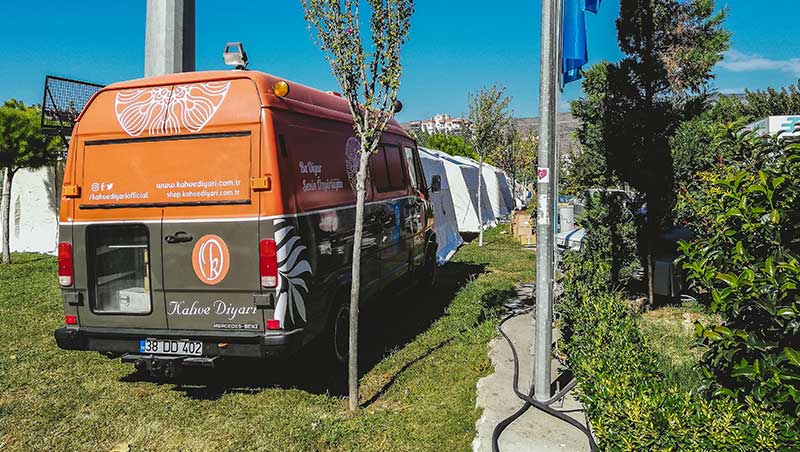 Our first destination was Bayraklı district where the most heavily damaged buildings and highest losses were located. This region is 70 km from the earthquake epicenter and reports indicate that the damage is concentrated in this area. The collapsed buildings here are mainly multi-story reinforced concrete structures. The local soft ground conditions and structural deficiencies in the region played a large role in the observed damages. 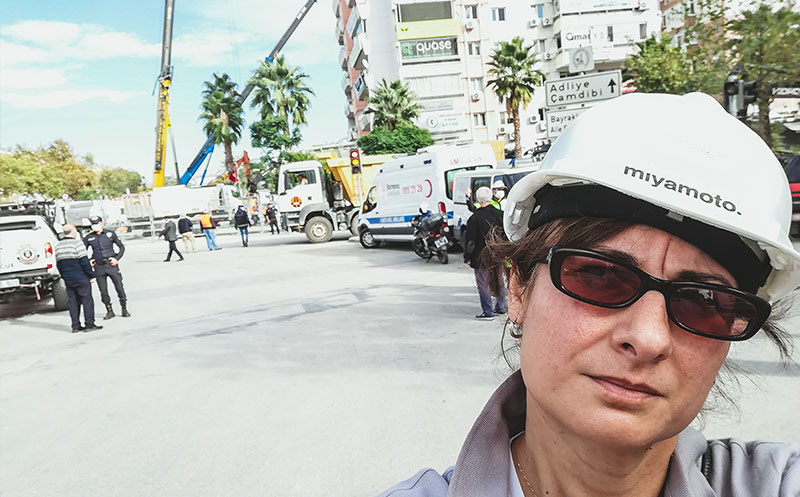 In the Mansuroğlu District of Bayraklı, the Rıza Bey Apartment completely collapsed and debris removal was in progress as we arrived. Rıza Bey is just one of the many buildings that were destroyed during the earthquake. A total of 21 buildings collapsed in İzmir and more than 100 lives were lost. The collapse can be seen in the video below.

Many other structures were quickly evacuated due to the heavy damages and casualties sustained. Their controlled demolitions had already begun and were monitored on-site. Our hearts were heavy and we shared the pain of those around us who had just lost their past and future as they now had to watch the remnants of their homes being demolished. Many could not even enter their homes to gather belongings due to risks while many more were just lucky and thankful to be alive. A video of the demolition can be seen here. 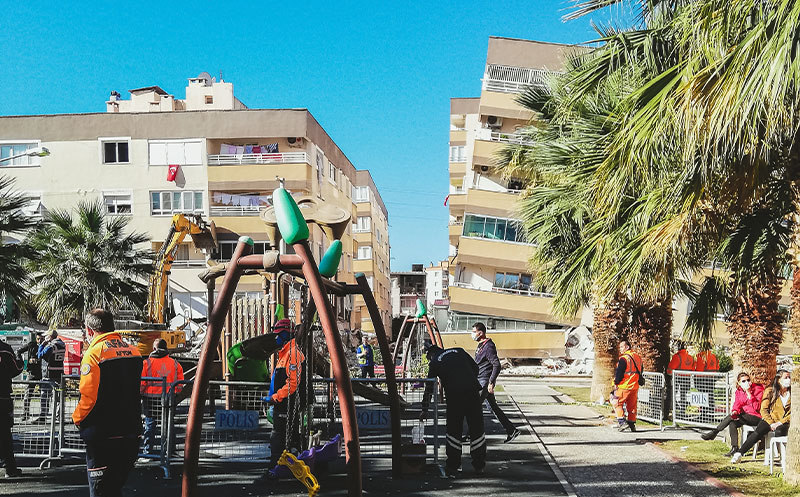 Baris Sitesi before the controlled collapse 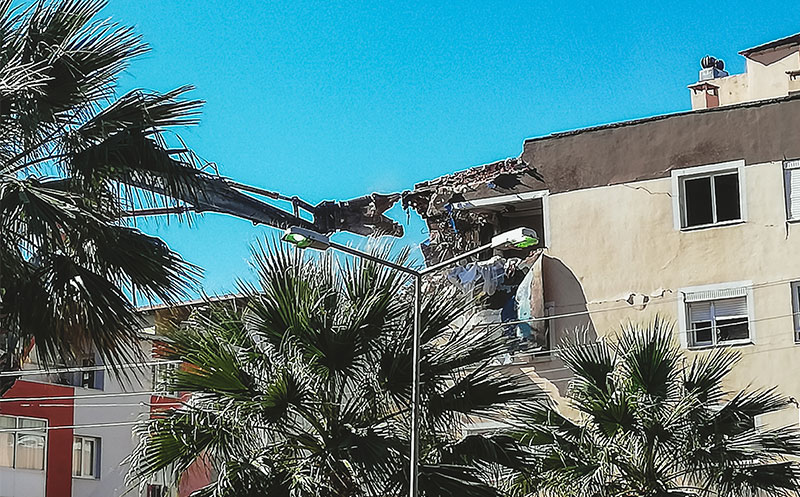 Baris Sitesi during the controlled collapse

In addition to these homes, many other buildings in the region were nearly destroyed. Izmir Courthouse in Bayraklı was heavily damaged and the roof of the courthouse is currently supported by a crane. Because of the proximity to the courthouse and the Palace of Justice, there are many lawyers’ offices in the region that also suffered from structural damages. The removal of debris was observed as seen below. 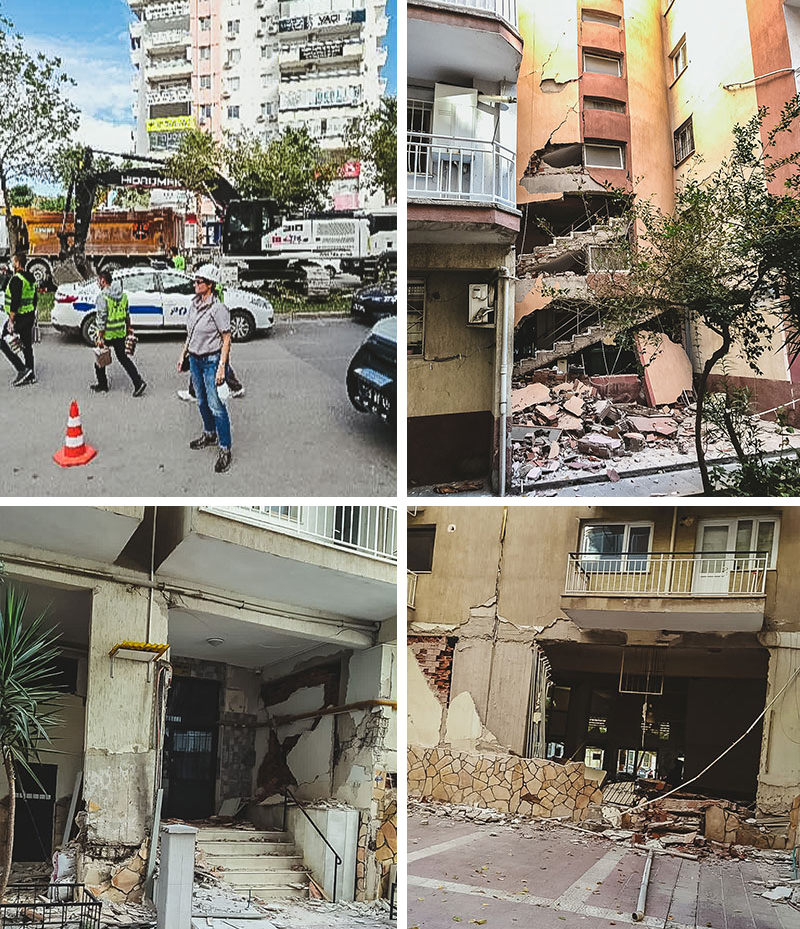 In Bayraklı, countless other small business owners now suffer the impact of the quake and it is uncertain when they will be able to reopen their shops.

Karşıyaka, one of the most beautiful districts of İzmir, is another region heavily impacted. In interviews with the remaining residents in the region, we discovered that many apartments, especially on the coastline, were evacuated by the homeowners immediately after the quake. House transportation vehicles were frequently observed in the region. A video of the damages can be seen here and relocation efforts can be seen here.

Seferihisar, one of the 6 calmest cities (Cittaslow) in the world, has been identified as the epicenter of the earthquake. This beautiful city is the first in Turkey to ever experience a tsunami. According to Kandilli Earthquake Research Institute, 9 minutes after the earthquake the sea rose 1 meter in Sığacık, the port area of Seferihisar on the coast of the Aegean Sea. The ensuing tsunami flooded the city streets with seawater resulting in an elderly woman losing her life. As a result, the city is now a ghost town.

Teos Marina, located in Sığacık and home to the Ancient City of Teos, was also severely damaged during the earthquake. In addition to the electricity and water infrastructure being destroyed, the mooring systems of the marina have completely disappeared and were broken off by ships set adrift in the tsunami. 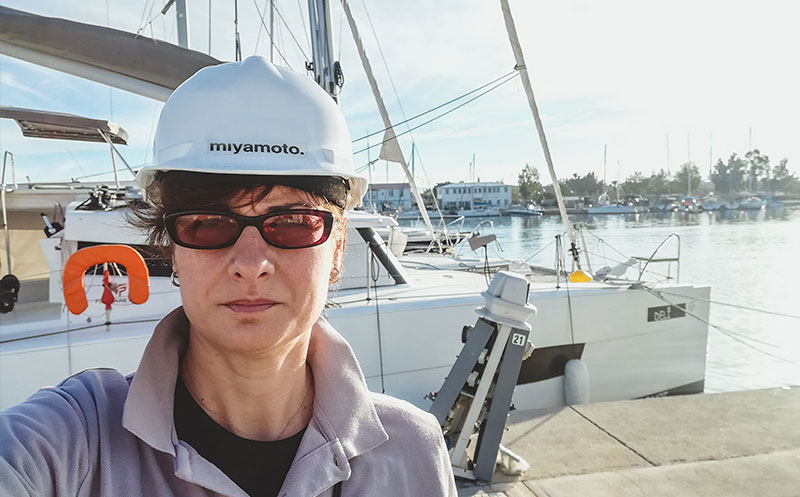 The search for these missing systems is ongoing and we witnessed some of them being recovered from the open sea. Marina officials informed us that, in total, 15 boats in Teos Marina were sunk, 5 boats are still missing, and more than 350 boats were damaged. In the boatyard, we observed the rescue and repair processes now underway for the sunken craft. In Sığacık, there is a small fishing town that also has a fishing port outside the marina. Here, fishermen, tour boats, and marine structures were injured and/or damaged in the tsunami. 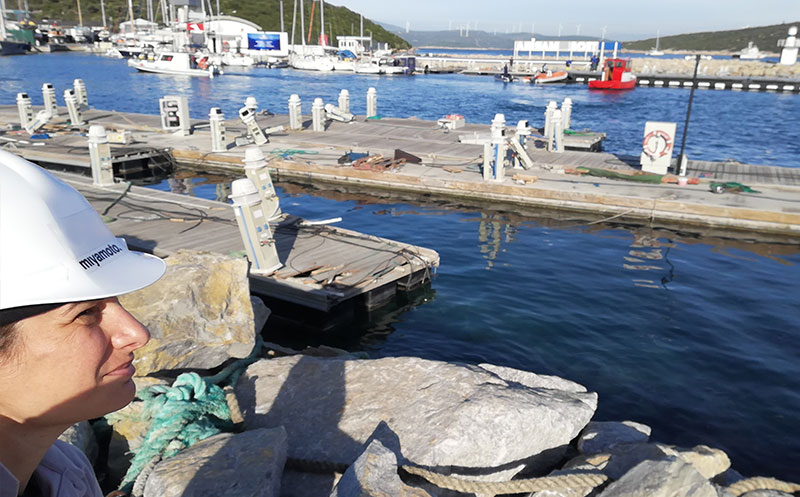 A damaged pier and mooring systems at Teos Marina

We were deeply saddened by the losses we witnessed while we were leaving Izmir city. Additionally, we were wondering about the potential comfort problems of the high-rise buildings surrounding the city, as this earthquake mostly affected vulnerable medium-to-high tall buildings, similar to the Mexican Earthquake of 1985 where heavy damage to tall structures (height > 17 m) was observed.