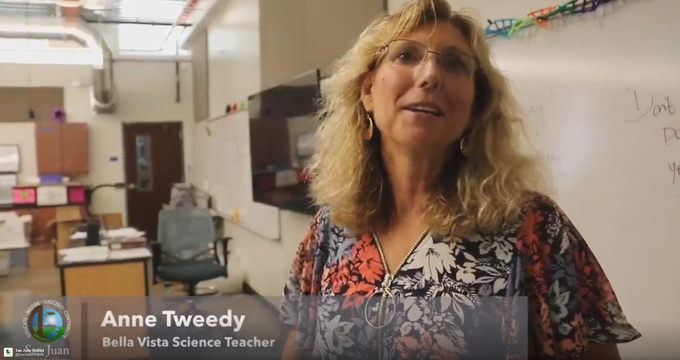 FAIR OAKS, Calif. — It’s customary to pop some bubbly when christening a new building, but students at Bella Vista High School in Fair Oaks, Calif., weren’t quite old enough for that yet. Instead, their celebrated the opening of their new Science, Technology, Engineering and Math (STEM) wing on Aug. 10 by “popping bubbles” — literally packaging bubbles.

“We’re having a ‘pop party,’” said Anne Tweedy, a science teacher at the High School, in a video tweet August 10. “We’re christening the room.”

Teachers and students didn’t hesitate to jump into the activities and check out the flex space that has been nicknamed “The Atrium.” In the video, students seemed to delight in wrenching the air out of the packing material, resulting in a joyous cacophony of snap, crackles and pops.

Tweedy said the bubble wrap signified that “they are moved in and no longer need the packing material,” according to the school’s website.

The innovative new building is a long-anticipated addition at Bella Vista High, a public school which has earned a reputation as one of the region’s leading high school science programs. (The school won the 2012 Sacramento County Academic Decathlon among other accolades). The school now has 22,000 square feet centered on STEM education. The building also features a 5,000-square-foot, flexible learning space.

The new building is part of a major overhaul on campus by the San Juan Unified School District. The district-wide improvements total more than $117 million in signature projects at nine high school campuses. The project was overseen by Miyamoto International, a global earthquake structural engineering and project management company, which maintains a Sacramento office.

The installation of a steel-framed Makerspace unified the once-divided area, which not only visually connects the units, but also provides for seismic gaps to diminish the possibility of future earthquake damage. The Makerspace, a popular trend on school campuses, complements the efforts of STEM-based education by providing a hands-on, creative lab are that encourages students to design, experiment, build and invent while deeply engaging in science and engineering concepts.

Scheduling and phasing the construction was key to the project’s success since the campus remained operational throughout the retrofit. Moreover, Miyamoto introduced AB 300 matching funds into the district (thanks to a California legislation passed in 1999 to seismic retrofitting of K–12 public schools) and led the Division of the State Architect (DSA) process to deliver an additional refund of 14 percent of the project budget back to the district. The school is part of the San Juan Unified School District in Sacramento County.