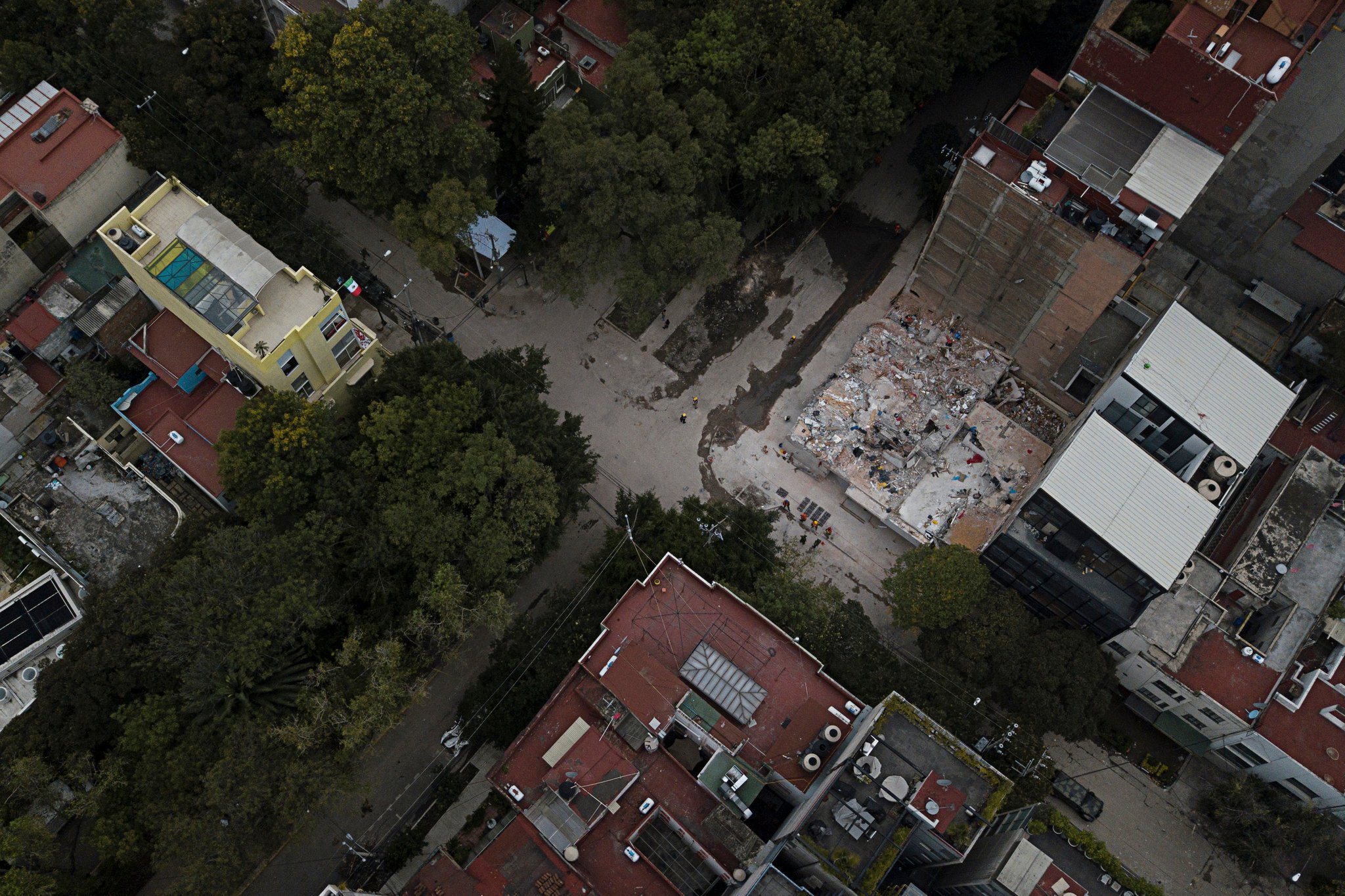 An aerial view of a collapsed building in the fashionable Condesa neighborhood of Mexico City after last month’s earthquake. Most of the structures that failed predated the devastating 1985 quake. Credit Miguel Tovar/Associated Press

MEXICO CITY — The buildings shuddered and rocked in the strongest earthquake in this city’s modern history, and yet they remained upright. Then, exactly 32 years later, they crumpled in seconds, killing 228 people.

A popular myth had evolved about those buildings that withstood the devastation three decades ago while vast parts of the city were leveled: a belief that their survival then might ensure their resilience when the earth next heaved.

That myth crumbled last month: Most of the buildings that gave way when a 7.1-magnitude quake struck Mexico City on Sept. 19 were built before 1985. And the destruction did not discriminate. The buildings that fell crossed classes and neighborhoods, burying accountants and garment workers in commercial buildings, children at a private school and residents of both a housing project and an apartment building on one of the city’s most desirable streets.

Now, their collapse has given new voice to experts who have long warned that the city must reinforce its structures to prepare for future stronger earthquakes. This time, they hope the disaster might bend the government’s political will toward a plan — and a way to pay for it. “We don’t just want pieces of paper,” said Arturo Tena Colunga, a structural engineer at the Metropolitan Autonomous University Azcapotzalco who studies how to strengthen buildings against seismic shocks. “This is a moment of opportunity, an inflection point for Mexican society.” 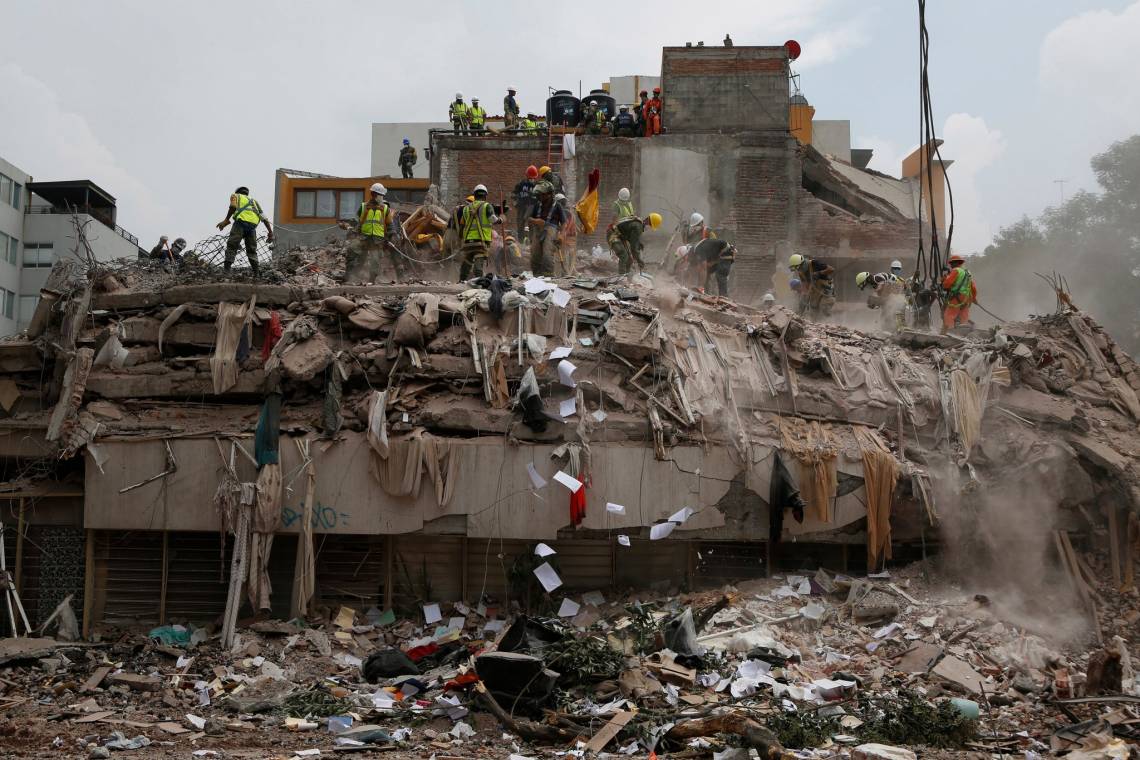 Workers cleared the rubble from a collapsed building in the middle-class Del Valle neighborhood of Mexico City. The destruction affected both housing projects and fashionable streets. Credit Rebecca Blackwell/Associated Press

After walking through the sites of collapse in the days after the earthquake, he was deeply frustrated. “Society is always thinking about saving money,” he said. But for “buildings in an earthquake zone, cheaper is always more expensive” when an earthquake hits.

Much has improved since 1985, when an earthquake here killed at least 10,000 people. The city has repeatedly strengthened its building codes, and updated rules reached Mayor Miguel Ángel Mancera’s desk the day before the most recent temblor.

But owners of older private buildings are not required to retrofit the construction to meet the new rules. And because every earthquake is unique, buildings respond differently each time.

“One of the lessons we need to learn is that we can never say that a particular building is safe,” said Sergio Alcocer, a structural engineer at the Institute of Engineering at the National Autonomous University of Mexico. “We need to cover all the possibilities for earthquakes coming from all types of places.”

Most earthquakes that affect Mexico City occur off the Pacific Coast, including the 8.1 earthquake on Sept. 19, 1985, that was centered about 215 miles west of the capital. Parts of the city lie on the sand and clay of an ancient lake bed, a geology that amplifies the shock waves from these distant epicenters.

The damage then was concentrated in the city’s central districts, leading to a widespread belief that other parts of the city would be spared in future shocks. 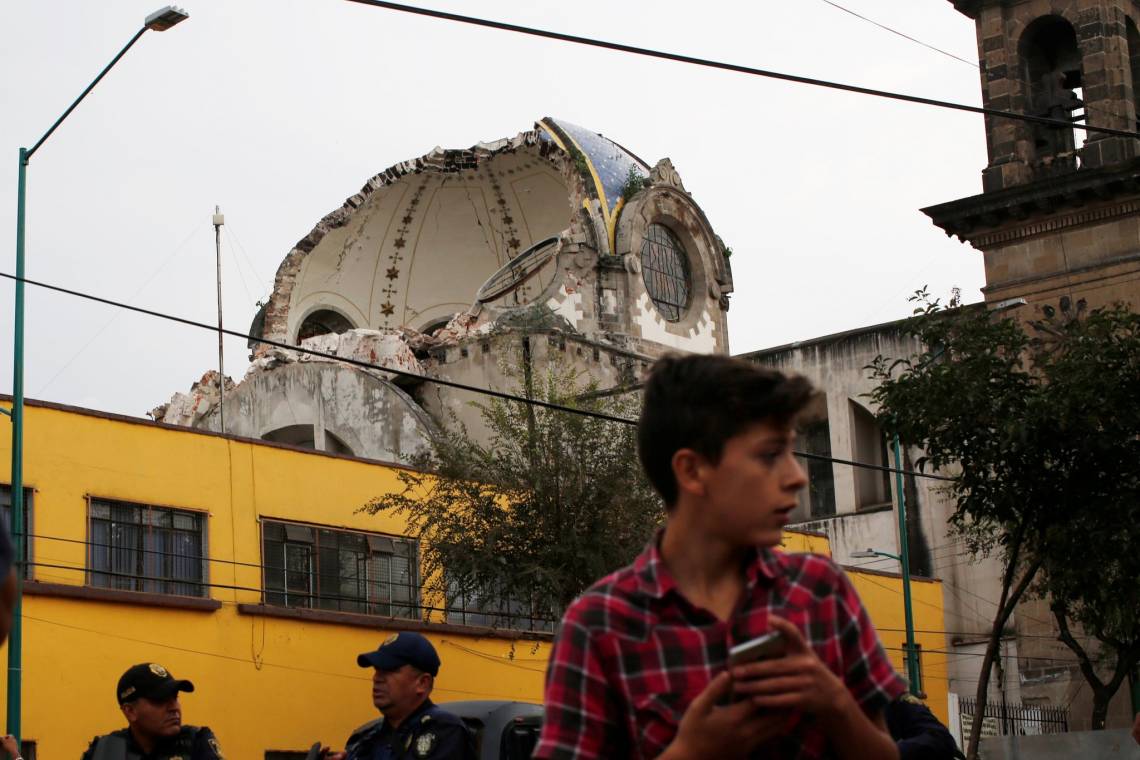 The dome of Our Lady of Los Angeles Church, which collapsed six days after the recent earthquake in Mexico City. Credit Carlos Jasso/Reuters

Last month’s temblor was atypical, because the epicenter was just 75 miles south of the city. Sections of the city’s south that had stood up well in 1985 bore the earthquake’s full force this time, and it was largely older buildings made of brittle concrete that collapsed, said H. Kit Miyamoto, a California seismic safety commissioner who visited Mexico after the recent quake.

The damage this time was limited because the earthquake was weaker than the 1985 quake and was quite deep, he said. But a closer, shallower temblor could cause 100 times more devastation.

“This is a warning not only to Mexico City, but a warning to L.A., San Francisco, San Diego, Tokyo, everywhere,” said Dr. Miyamoto, a structural engineer. In all of these cities, older structures of brittle concrete are vulnerable to a strong earthquake.

Los Angeles has moved toward mandatory retrofitting for the buildings most at risk — older concrete structures and those with a “soft story,” an open ground floor used for parking or a store front.

“L.A. is doing it right now as we speak,” Dr. Miyamoto said, estimating that 13,000 “soft-story” apartment buildings are affected by a recent city ordinance. “It’s definitely feasible to do this. It’s not as expensive as people think.”

“Businesses need to understand that seismic strengthening can be good business,” he added.

After the 1985 earthquake, Mexico City did retrofit schools, public buildings and a few of the largest private offices. Most of those buildings appear to have held up well this time, Dr. Alcocer said. 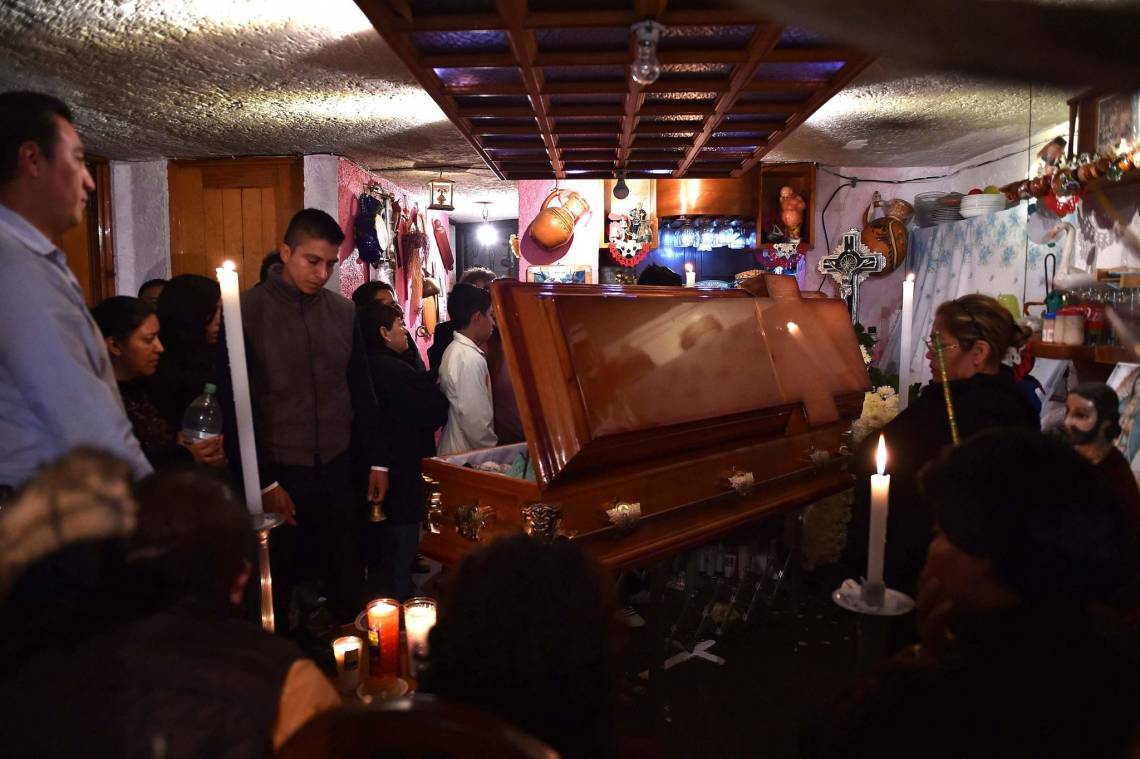 Mourners at the wake for María Ortiz Ramírez, who died in one of the flattened buildings in the city’s Roma Norte neighborhood. Credit Yuri Cortez/Agence France-Presse — Getty Images

For the owners of other private buildings, though, the decision was largely voluntary — unless they changed the structure’s use by converting apartments to offices, for example.

“This earthquake made us realize that there are many buildings that haven’t been brought up to date,” said Edgar Tapia Hernández, a structural engineer who is also at the Metropolitan Autonomous University Azcapotzalco.

It is likely that many of the structures that collapsed this time were never retrofitted, Dr. Tena Colunga said, including a 1983 building at the private Enrique Rébsamen school, where 19 students and seven adults were killed.

The image of the pancaked school building framed by a halo of wooden beams wedged in the concrete to brace it now haunts the city. Last week, officials uncovered a paper trail showing repeated building violations by the school’s owner, which resulted in only minor penalties.

Claudia Sheinbaum, the delegate for the Tlalpan District, where the school is located, filed a criminal complaint last week over the collapse. The complaint asked the city prosecutor to investigate why unauthorized construction on the building’s third and fourth floors was allowed. Another city agency had already accused the school’s owner of submitting a false zoning permit.

The owner has not appeared in public for more than a week and the lawyer representing her did not respond to a telephone call. 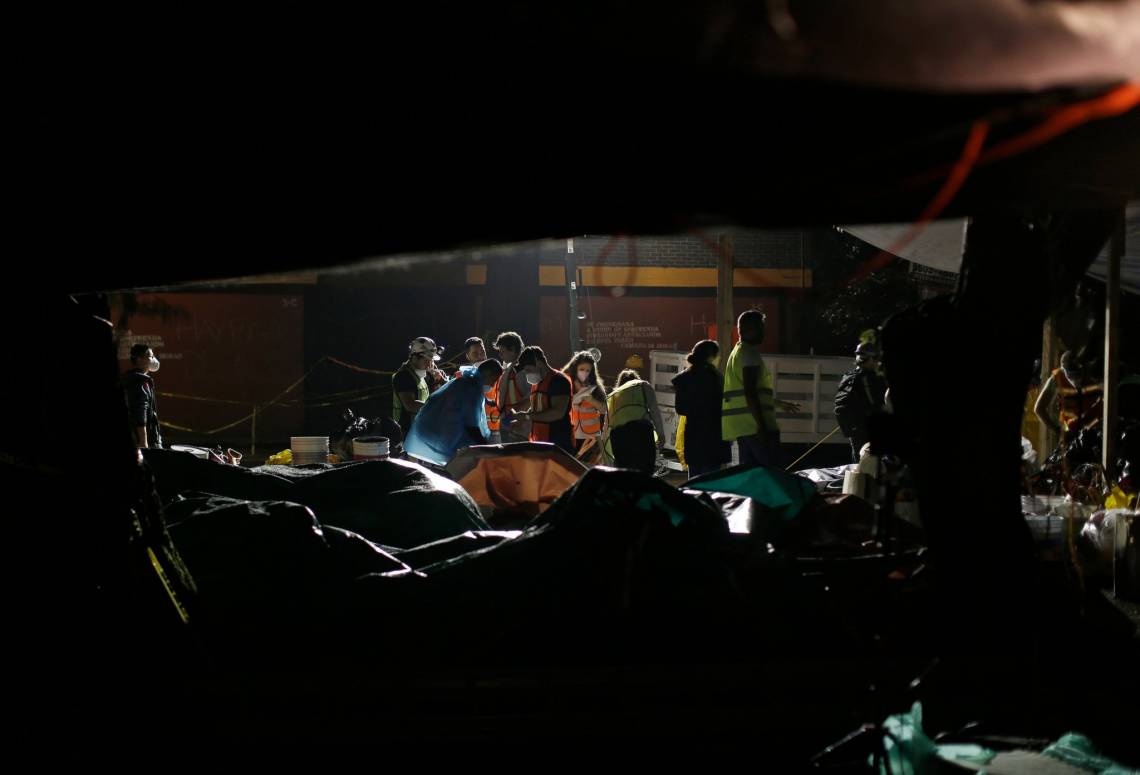 Volunteers organizing supplies at the Francisco Kino school, which was turned into a temporary shelter for evacuated residents in the Tlalpan district. Credit Natacha Pisarenko/Associated Press

But even where there are no accusations of wrongdoing, the cluster of dots on the city’s maps marking fallen and ruined structures suggests how much work is needed. Mr. Mancera, the mayor, said Thursday that in addition to the 38 buildings that collapsed, 800 to 1,000 others sustained serious structural damage, although that figure could still rise.

Such insights, combined with the knowledge that experts now have about the seismic zones underlying the city, make it possible to begin identifying the structures that are most at risk.

Dr. Tena Colunga said he would like to see mandatory reviews of buildings with more than 100 occupants. Building materials degrade over time, he said, like a paper clip that is bent and unbent repeatedly until it finally snaps.

“For every peso that you spend on retrofits, you are saving seven pesos later on,” he added.

But the local left-wing assembly may balk at anything that sounds too authoritarian. And there is a question of money.

“You need an ordinance” and a way to make such reviews economically viable for poorer residents, Dr. Alcocer said. To convince building owners to pay for retrofits, “you have to be very reasonable in time and economic incentives.”

“I don’t know politically how much this program would move” forward, he said.

Original Article: In Mexico City, Pressure to Prepare for the Next Big Earthquake
Please Share This
Like what you see? Let's work together