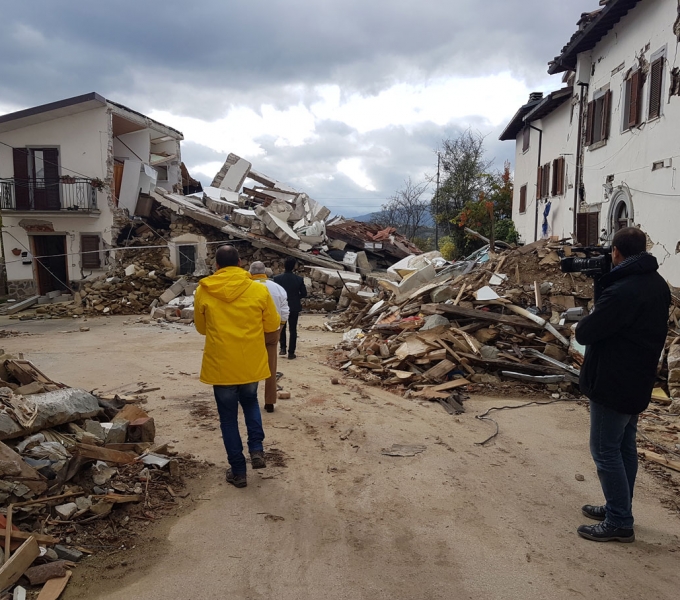 The structural flaw in those ancient stone homes is not so different from unreinforced brick buildings built in California before 1933.

(TNS) – Surveying the devastation of centuries-old villages pummeled by a major earthquake in central Italy this week, it’s easy for Californians to think that the more modern buildings here would better survive the shaking.

But seismic experts and structural engineers say there remain many buildings across California that could not withstand the type of magnitude 6.2 temblor that on Wednesday hit Amatrice and other rural villages in the Apennine Mountains that form Italy’s spine.

The structural flaw in those ancient stone homes is not so different from unreinforced brick buildings built in California before 1933, they say. That year, the Long Beach earthquake flattened many structures and left 120 people dead.

The shaking in Long Beach turned the mortar between bricks back into sand. With nothing tying the walls to the roof, bricks shot out from walls like cannonballs, and roofs came crashing down. Numerous office buildings, stores and schools collapsed.

The devastation began decades of earthquake safety measures in California, including a ban on new brick buildings that have not been reinforced. Some cities, including Los Angeles and San Francisco, forced property owners to retrofit or demolish existing unreinforced masonry structures.

But thousands remain. Officials have expressed particular concern about cities including San Bernardino and Bakersfield, where there are clusters of these buildings and no retrofitting requirement.

“They are unbelievably dangerous buildings,” said structural engineer Kit Miyamoto, a member of the California Seismic Safety Commission, who has visited Italy before to study earthquake damage. “The things that we see in Italy), there will be similar things that we see here.”

But the lion’s share of casualties in Italy are believed to have been people trapped in the rubble of unreinforced stone homes that date back to medieval times, Calvi said.

“It was just terrifying — really, quite a bit of destruction,” U.S. Geological Survey geologist Kate Scharer said. “It’s one of the most problematic (types of buildings) for withstanding even moderate magnitude earthquakes.”

Brick and brittle concrete buildings have been the focus of much debate in recent years. Los Angeles last year passed the nation’s toughest earthquake safety rules, requiring retrofitting of brittle concrete buildings, and San Francisco is studying similar rules. There has also been a push in some areas to deal with vulnerable brick buildings after recent California quakes highlighted the dangers.

After the 2014 Napa earthquake, South Pasadena began to study its seismic vulnerabilities. The results were disturbing: Out of 60 brick buildings, 27 were still not retrofitted. Signs were not posted warning about the earthquake risk.

Last week, the South Pasadena City Council voted 4-0 to require the rest of them to be fixed, giving owners a deadline of 21/2 years once they receive a new order to comply. The affected buildings include commercial and multi-unit residential structures.

“Safety is not negotiable,” said city manager Sergio Gonzalez. “The city is over 125 years old … and we want to work with owners so that all of our residents and patrons are safe.”

“You basically have four walls being held up by the weight of the roof, so when they shake, there’s nothing to keep them together,” Gonzalez said. “The reinforcement allows people enough time to get out safely” once the shaking has stopped.

Concrete buildings are generally much larger than brick ones. They can cost more than $1 million to fix, making them far more expensive.

The earthquake struck Italy at perhaps the worst possible time — the late summer season, when children from the city are sent up to their grandparents’ ancestral homes in the mountains, filling residences that are usually empty. The region has only 5,000 or so residents, but is now filled with tens of thousands of visitors. Amatrice this weekend was to hold its annual festival for its namesake signature pasta, spaghetti all’amatriciana.

“This is the reason there are so many victims, because there are many people there who are not normally living there,” said Calvi, the Italian professor. “It is well known that there is a very high vulnerability, and consequently, there is a very high chance of collapse in case of a strong earthquake, like this one.”

It wasn’t just homes that are gone. A hospital collapsed, and buildings for police and firefighters were ruined, Calvi said. In one town, there was not a single building safe enough to set up an emergency command post, so officials were forced to set one up in the town square, Calvi said.

“In a high seismicity zone, this is really unbelievable,” Calvi said. He said lawmakers have considered, but never acted on, reforms to convince owners to retrofit these quake-vulnerable buildings. Calvi said there is not much motivation for owners to retrofit.

“This is a problem related to the fact that politicians have not really paid attention,” Calvi said.

There was one exception. One town near the epicenter, Norcia, saw no deaths, said Paolo Bazzurro, professor of structural engineering at the Institute for Advanced Studies of Pavia. “I heard there was not even a single injury.”

That’s because the town was struck by a moderate earthquake in 1997, and money poured in to strengthen structures.

“A lot of buildings were retrofitted, and therefore, they fared way better,” Bazzurro said. “This is certainly a lesson to learn.”

The Italy earthquake is similar to the kinds of earthquakes seen in California. Even a magnitude 6 earthquake can cause severe damage if it’s shallow, and hits directly underneath a populated area.

“Think of an earthquake as a bomb underground,” Hough said. “Whether it’s six miles below your feet, or 50 miles down, makes a big difference.”

Other shallow earthquakes have walloped California in the past, such as the 5.9 Whittier Narrows earthquake of 1987, which severely damaged brick buildings in Pasadena, Alhambra and Whittier.

“You don’t expect very long shaking, but it can be very intense, especially for unreinforced brick construction, which there is quite a bit in Italy,” said Tom Heaton, Caltech professor of engineering seismology. “If you’re in the wrong building, you can be in a lot of danger.”

Even worse was that many of the Italian villages were at the tops of mountains.

“Mountains sort of behave like a loudspeaker,” said California Institute of Technology mechanical and civil engineering professor Domniki Asimaki. As seismic waves move up to the peak, the earthquake energy is funneled into a smaller space, making the shaking worse at the very top.

The principle was confirmed in USGS helicopter observations of villages after last year’s 7.8 earthquake in Nepal. “Some of those villages built at the tops of those mountains, the structures almost appear to have exploded,” Asimaki said.

Knowing that earthquakes are a fact of life should be a warning for those in Italy and in California.

“Why are so many people dying in terrible buildings? To answer that question, you only have to spend time in beautiful Italy to appreciate that, in a sense, we go there, we enjoy it because of those beautiful old buildings,” said former USGS geophysicist Ross Stein, who writes about earthquakes at temblor.net. “Strengthening these buildings is expensive. People resist because they’re beautifully, culturally treasured buildings. But they kill people.”