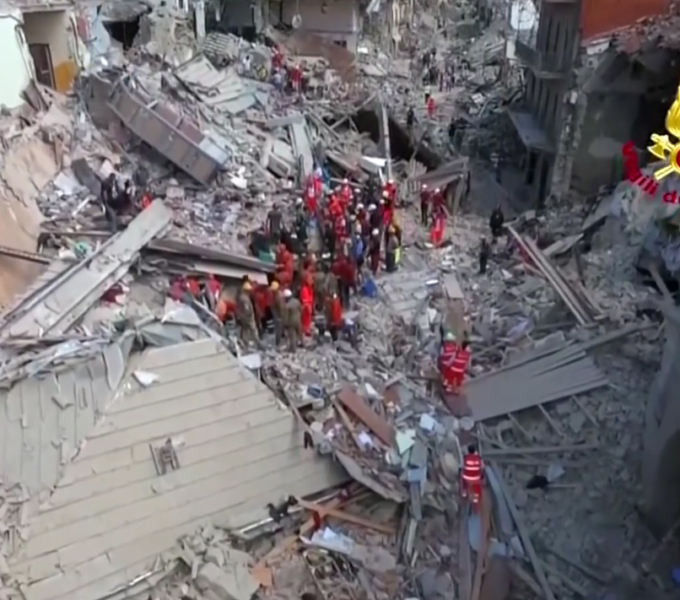 Updated, 1:42 p.m. | You’ve likely seen some of the wrenching closeup imagery emerging after a shallow 6.2-magnitude earthquake shattered ancient villages in the Appenine mountains 80 miles northeast of Rome on August 24, killing 241 people at last count. But sometimes a wide view can be as sobering. 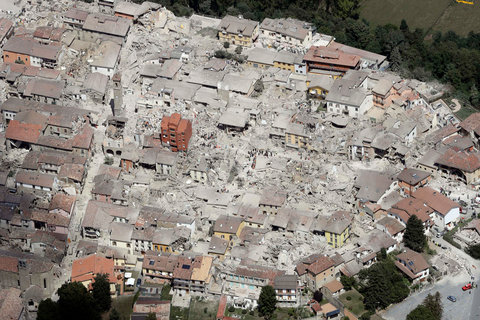 The historic center of Amatrice, Italy, was largely obliterated in an earthquake on August 24.Credit Gregorio Borgia/Associated Press

This aerial view of Amatrice, the medieval town that saw the worst destruction and death toll, says much about the continuing peril facing thousands of other residents of this region.

Around the Apennine range, relentless tectonic forces are made more deadly by the populace’s dogged resistance to modernity and love of history and place. It was no accident that a newer, sturdy building was the exception to the destruction.

The prognosis, sadly, is more destruction and death.

This is a very different situation than, say, in China’s Sichuan province, where tens of thousands died in a devastating 2008 earthquake that shattered thousands of vulnerable buildings, but people clamored for change — particularly for safer schools.

It’s also different than in Nepal, where last year’s earthquakedevastated dozens of villages and parts of Kathmandu. There, as I wrote, signs were already emerging even before that disaster thatsafer construction methods were slowly being adopted. (Read “Tectonic shift to paradigm shift on quakes in Nepal.”)

Why Italy is different was explained to me in a Skype conversation I had last night with Marco Cossu, a structural engineer and president of the Italian branch of the earthquake engineering consultancy Miyamoto International. The firm has a team that will be helping authorities and nonprofit groups assess damage and plan any reconstruction.

Given the similarly deadly earthquake in nearby L’Aquila in 2009and the region’s shaky history, with 30,000 killed in Avezanno in 1915, I asked Cossu if there was any move to reconsider lifestyles in the face of the clear dangers. Could people live in newer apartments outside of town and commute into their shops or the like?

He spoke of resistance rooted in the very thing that makes rural Italy so special.

“It isn’t the Italian culture to leave their land, their village,” Cossu said. “After the L’Aquila earthquake, the government built new towns to relocate people who lost their houses – and these new towns were outside, far from the damaged villages. There was a lot of discussion about that. And most people were convinced it was not the right approach to move people, even if they are safer.” (The Irish Times and China’s Xinhua news agency published fascinating articles earlier this year — here and here — on the problems and issues attending the revival of L’Aquila.)

With a perceptible feeling of resignation, even in an engineer devoted to making places safer, he concluded this way:

“The church, the monument, the tower — these are part of the family. Our approach is not to demolish what is unsafe. We always try to fix or strengthen in order to keep it because most of these things are part of our identity. I don’t know if it’s right or not but it’s like that.”

He and a team of engineers are heading to Amatrice tomorrow.

6:3o p.m. | Deborah Brosnan, a scientist focused on disaster risk reduction (and an author of an important report on planning for extreme geohazards), sent this relevant reflection:

A sense of place is core to all cultures. The older the culture the deeper the sense of place. The U.S. is a new country. It has a stronger sense of political identity than it does of physical structures and places.

Our treatment of this complex issue is not as sophisticated as it needs to be. We send mixed messages. Humans have traditionally settled in harm’s way because natural hazards are associated with resources that we need, like water and food. Cultures persist when the losses do not destroy them completely.

In conservation, we acknowledge and vigorously foster the sense of place as the critical bond between humans and their environment. We argue that it’s key to sustaining our planet.  Yet when hazards become disasters we focus on the dangerous “place.”

I grew up in the west of Ireland where the sense of place was enshrined and all-defining.  Many of my ancestors had left during a disaster known as “the famine” and the ruins of their homes still dotted the landscape.  For those who didn’t leave the bond between land and people grew stronger, and having land was a mark of a person’s worth.

When I worked in Sri Lanka after the Southeast Asia tsunami, many of the displaced survivors were housed in U.N. tent communities.  But during the day or even at night, they’d go home.  I saw them sitting on makeshift chairs in places where there was barely a foundation left or nothing at all. Their “home” was their only anchor in a world that had been turned upside down, and where other anchors like family and friends were gone.  But they were also afraid, fearful that if they didn’t protect their property then someone else would move in and squatters would take possession. I witnessed similar feelings and behaviors when working through the volcanic eruption in Montserrat.

A nation’s cultural history, relationship to natural resources, and frequency of hazards all determine the sense of place and the meaning of leaving or changing.

Rural Italy, like the west of Ireland, has a deep sense of home; however risky, it’s an established known. This is a complex subject that runs deep in our D.N.A. and evolutionary history.  The way we handle it will determine how well we navigate climate change. Thanks for starting the conversation that we need to be having.

It struck me years ago that Italians’ view and appreciation of place differs from that of most Americans. Here we can’t tear things down fast enough in our rush to build something bigger and better. Italians don’t tear things down; they add on. Homes and villages dating back as far as medieval times are cherished, growing organically over the years with another story here, another addition there, new buildings attached to old buildings. The result is a tourist’s dream and an engineer’s nightmare. It’s hard enough to retrofit a relatively modern masonry building; I’m not sure what strategies even exist for retrofitting a medieval village.

Nepal is similar but different: effective retrofitting is difficult if not impossible, but cultural issues take a distant back seat to resource limitations. All of which argues strongly for the importance of building codes and proper construction in the first place. It is a whole lot easier to make a building earthquake-safe in the first place than to shore it up after it’s built.

10:30 a.m. | I also encourage you to read “Italy’s Fragile Beauty,” an Opinion piece by Beppe Severgnini, a columnist for Corriere della Sera and the author of “La Bella Figura — A Field Guide to the Italian Mind.”