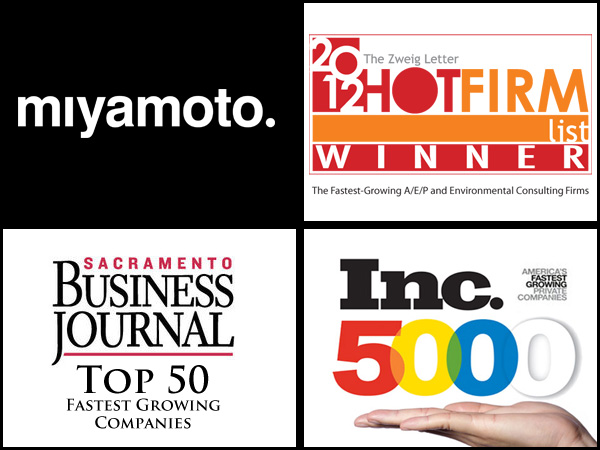 The West Coast –based, global earthquake and structural engineering company received honors from the Inc. 500/5000, the Sacramento Business Journal and the Zweig Letter 2012 Hot Firm list.

The business magazine, Inc., published its annual list of America’s top 500/5000 fastest-growing and most successful private companies. This year, Miyamoto celebrates its achievements among companies such as Microsoft, Oracle, Jamba Juice and numerous other entrepreneurial success stories. The company ranked No. 69 among top engineering firms that also placed on the Inc. 500/5000 list.

“To rank among the 2012 Inc. 500/5000, your company had to thrive through three of the toughest years this economy has seen in living memory,” states Inc.’s Editor-in-chief Eric Schurenberg in an online letter to the honorees.

In addition, Miyamoto International was named a Zweig White 2012 Hot Firm winner. The company was also recognized by ZweigWhite in 2007, 2008 and 2011. The annual Zweig Hot Firm List honors the top 100 fastest-growing architecture, engineering, planning and environmental consulting firms in the nation.

With a growing operation in California, New Zealand, Bangkok, Europe, Japan and Haiti, as well as membership in organizations such as the Global Earthquake Model and the United Nations Global Compact; Miyamoto International is quickly making itself known as a global presence whose mission is to make the world a better place. Their goal is to provide safety to over 200,000 lives per year.