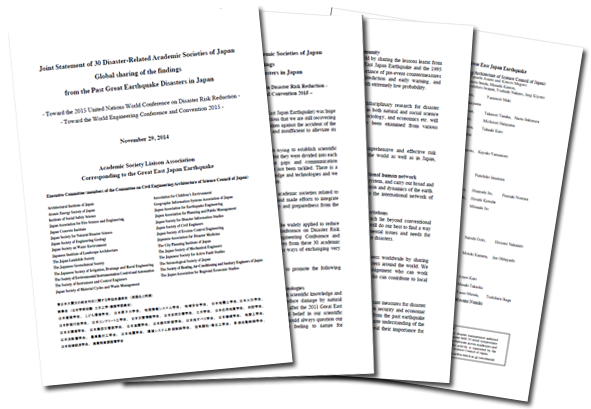 Japanese engineers and scientists who develop seismic technologies for disaster reduction have been divided, but now aim to collaborate more after studying the fallout from recent major earthquakes, according to a Nov. 29 joint statement.  The 2011 Great East Japan Earthquake, for instance, induced damage “so serious that we are still recovering from it and still face many issues,” the statement said.

“After the 2011 Great East Japan Earthquake, we, 30 Japanese academic societies related to disaster management, started to deepen mutual understanding and made efforts to integrate different specialties,” the statement said. Division among seismic specialties has created vast knowledge and communication gaps, the group wrote.

Eight action items have been established, including sharing knowledge internationally and working to create communities that are more resilient and prepared for huge disasters. The eight point are all outlined in the statement, “Joint Statement of 30 Disaster-Related Academic Societies of Japan,” which will be the basis of presentations at global conferences in 2015.