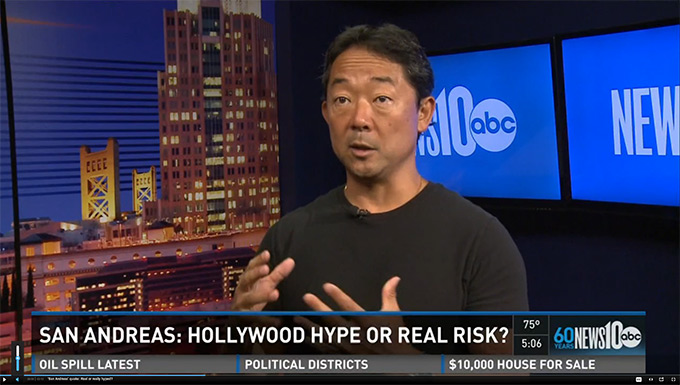 New10.net – Remember… “San Andreas” is a movie. Hollywood-scripted magnitude 9.6 earthquakes are almost impossible to happen in Los Angeles and San Francisco, so say seismic experts. They say the maximum on the San Andreas fault running up and down the West Coast would be an 8.3 based on computer models.

Still, that could cause about 2,000 deaths and over 50,000 injuries. In spite of the fact that “San Andreas” embellishes for effect, what we’re seeing is something that experts say is bound to happen. A major quake on the San Andreas fault will affect the entire state of California. “I’m really concerned about Sacramento” said Dr. Kit Miyamoto who trave;s the world after earthquake disasters. He said what the quake he stood in in Nepal 7,500 miles away will happen in Northern California. “There will be a major earthquakes in … up and down California, that’s a given. Chances are really high that you and I are going to see this during our lifetimes, no doubt about it. You’ll see a magnitude 7 or 7.5 maybe higher if that happens, we’re going to lose a couple of thousand people from say SF or LA and we may actually lose a city for a little while,” Miyamoto said.

The San Andreas fault was at fault for the 1906 San Francisco earthquake. A map of earthquake fault lines throughout Northern California shows underground pressure is building and rock movement is inevitable in these areas. It’s realistic to expect a magnitude 7.0 quake in San Francisco causing significant damage and loss of life. But will it look like the “San Andrea” portrayal? Dr. John Parrish is the state geologist for California. He separates the movie from actual science. “It will not be devastating as it shows in the picture, so don’t give up hope,” Parrish said. “Go and enjoy the picture, it’s a great escapism but it’s not science reality.”

What about a tsunami hitting San Francisco after the big quake? That’s Hollywood too, according to the United States Geological Survey. Most tsunami’s are caused by underwater quakes which is something San Francisco doesn’t have to worry about. And for the record, it would BE a record if the movie’s magnitude 9.6 quake hit San Francisco. The largest real quake of all time was a magnitude 9.5 in Chile in 1960.