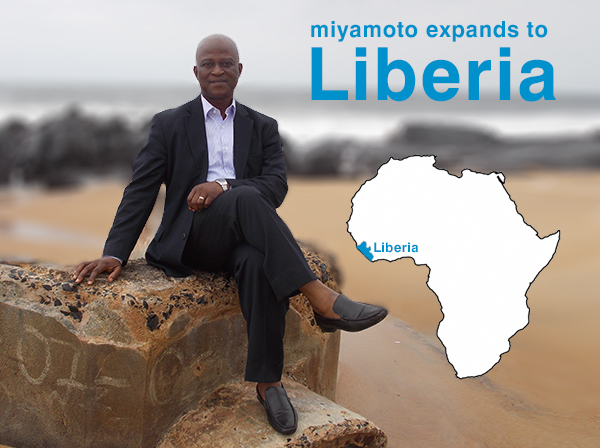 MONROVIA, Liberia (August 18, 2014) – Miyamoto International, a global engineering company, expanded to the African continent this week, with the addition of a company in Liberia. Miyamoto International Liberia will be led by Samuel Thompson, the former Managing Director of Liberia’s National Housing Authority.

“Their decision to make Liberia their first presence in Africa in the midst of the Ebola crisis, when several investors are either slowing down their operations or deferring their investments here, is a clear vote of confidence in the future of our country,” Mr. Thompson said.

“Ebola is a disease materialized by lack of basic infrastructure – health, shelter, water, food,” said Miyamoto International CEO Dr. Kit Miyamoto. “We do our part: providing an affordable, safe and sanitary environment to live. This mission is critical because it will address the well-being of people in a long term. Right now, international investments are fleeing this country. We disagree. This is the time when investment in the future is needed the most. This cannot be a setback for Liberia’s future. I believe the commercial sector has a responsibility to society.”

With more than a dozen offices worldwide, Miyamoto International’s operations in Liberia will focus on low-income housing development, with emphasis on the technical, financing and construction management aspects of building homes for Liberia’s people. Following many years of civil war in Liberia, the country faces a severe housing shortage; more than 60 percent of the urban population lives in substandard housing and slums, according to Liberia’s National Housing Authority.

Mr. Thompson has more than 30 years of experience in finance, business development and economic development and is a graduate of Syracuse University. Apart from his leadership role at the National Housing Authority, he was Deputy Governor of the Central Bank of Liberia, a member of the Board of Governors of the Central Bank and Co-founder/Executive Director of the Agency for Economic Development & Empowerment (ÆDE), a non-profit entity dedicated to promoting peace, unity and economic development at the local level and advocating for social justice.

“The shortage of affordable and safe low-income housing in developing countries is a critical international issue,” Miyamoto said. “Liberia invited us to visit their country and take a look at their housing challenges after seeing our work in Haiti, where we rebuilt more than 12,000 homes. That model translates to helping other countries develop and execute plans for housing needs worldwide.” “Liberia will need 500,000 more homes by the year 2030, so we believe this will be a great collaboration for our country and our people,” Mr. Thompson said.