NAPA, Calif. (September 2014) — Like everyone else in Napa, Richard Long was jarred awake in the wee hours of Sunday, August 24 when a magnitude-6.0 earthquake shook, roared and rattled through the famous wine-making valley. As the owner of the upscale food manufacturing business Tulocay & Co., one of his first responses was to find out how his facility on Devlin Road held up.

Driving through town, he saw homes knocked off foundations and stone and brick rubble piled in the streets. “I was expecting a lot of damage,” he said of his facility, which makes brands such as Made in Napa and Nature’s Habit. “Instead, I was pleasantly surprised.” His three buildings on five acres include corporate and sales offices, a retail store, café and test kitchen and manufacturing and distribution facilities. “The buildings performed as designed,” he said. “There was no damage whatsoever. Not even cracks in the sheetrock.” 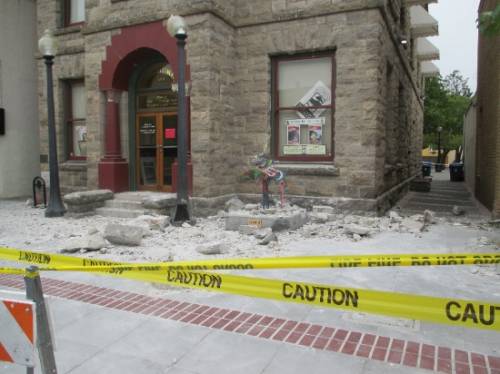 Tom Chan and Bob Glasgow, engineers from global earthquake + structural engineering firm Miyamoto International, visited the historic downtown and Napa-area clients the day after the earthquake, including Long, to see how buildings engineered by Miyamoto performed.

What they saw was exactly what they expected: a few fallen ceiling tiles, product on store shelves tipped over, and cracked paint on gypsum wallboard joint lines.. But building after building emerged structurally sound – even though the M6.0 quake was the strongest to shake Northern California since the M6.9 Loma Prieta earthquake in 1989 that killed 63.

Older wood and masonry buildings in and around downtown Napa, however, did not hold up as well, as anyone watching television news has seen. As Chan notes in his official report on the earthquake, “…unanchored houses slid off of their foundations and fell. A couple of dozen homes lost brick chimneys. Unreinforced masonry buildings (URMs) cracked and spilled bricks and stone on the streets below.” 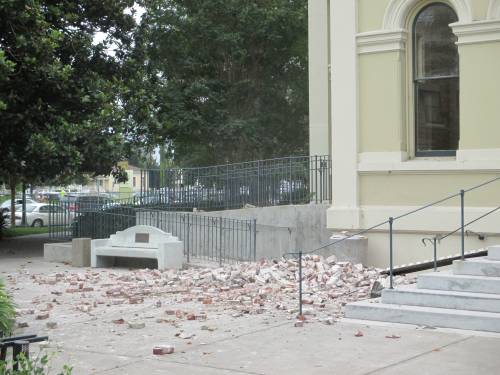 But it was a pile of bricks and stone knocked from Napa’s historic 1870s-era courthouse that most troubled Glasgow, even days after the earthquake. Just feet from the heavy rubble sits a park bench that might have been occupied had the earthquake hit midday. “Had that happened at noon, someone very likely could have been killed,” Glasgow said.

“This and every other recent earthquake should be taken as a wakeup call to residents and business owners in California,” the Structural Engineers Association of California (SEAOC) said in a statement. SEAOC advises that owners have their buildings assessed for how they are likely to perform in a large earthquake and what the potential losses might be, “so that informed risk-management decisions can be made.” According to the U.S. Geological Survey and the Working Group on California Earthquake Probabilities, the San Francisco and Los Angeles regions have a 63 percent and 67 percent probability of a M6.7 or greater earthquake in the next 30 years. For California as a whole, the probability is 99.7 percent.

Solutions exist “that building owners can implement now to control costs and outcomes instead of letting an earthquake dictate their fate,” SEAOC said. Understanding where your building is most vulnerable and what financial impact an earthquake could have on your bottom line is an important first step. A small investment to strengthen your building will protect your financial investment, increase occupant safety and minimize business interruption in the event of a major earthquake. Consider downloading: 4 STEPS TO KEEPING YOUR BUILDING OPERATIONAL AFTER AN EARTHQUAKE

“Many building owners don’t realize that buildings built to code today are not earthquake proof,” Glasgow said. “They are designed to get people out – safely…” Miyamoto specializes in the “beyond code” design and retrofitting of buildings to withstand large earthquakes.

Tulocay & Co. was among the prepared. “They were back making granola on Monday,” Glasgow said. “That’s what you want to see.”