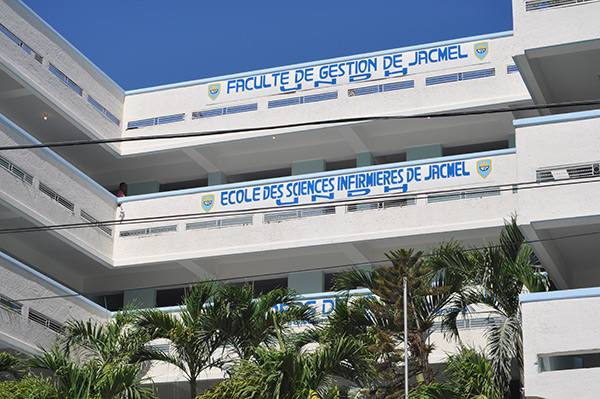 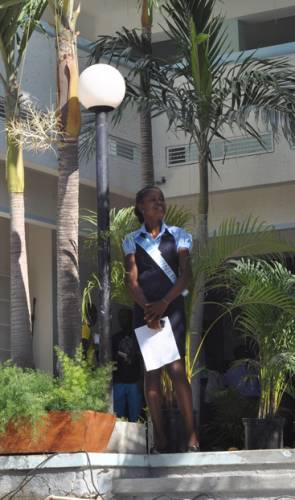 JACMEL, Haiti (Jan. 28, 2014) — The earthquake-damaged Catholic university and professional school  in Jacmel celebrated its inauguration and grand reopening on Saturday – to the delight of the community and students pursing degrees in subjects ranging from business management to nursing.   The large, four-story Université Notre-Dame D’Haïti was unsafe to occupy ever since a magnitude-7.0 earthquake devastated Haiti in 2010 – dashing the dreams of students as well.

“Instead of demolishing the building, we were able to save it through the application of high-performance engineering technologies,” said Ms. Guilaine Victor, country manager of Miyamoto International, the project’s structural engineering firm.  The repair and seismic upgrade of the university was funded by the Catholic Church through their partner, PROCHE, executed by GDG Beton and supervised by Miyamoto International. The school is now safer than ever.

Rather than merely repairing the damage, the structure was strengthened through building additional concrete walls and strengthening the masonry walls with a fiber-reinforced polymer cloth called FibrWrap (FRP). This high-tech product dramatically improves the strength of masonry and concrete walls, allowing them to better withstand the next earthquake. It’s also a less costly approach than tearing buildings down and starting from scratch. “Working with new building technologies, we are able to ensure that the students at Jacmel Catholic School have a safe place to learn,” said Mark Broughton, Miyamoto International’s structural engineer.

Officials attending the inauguration included the representative of the Pope, Archbishop Bernadito Auza; the Bishop of the South East, Launay Saturné of Jacmel; the Auxiliary Bishop of Brooklyn, N.Y., Guy Sansaricq; representatives of the Haitian Senate, the Civil Society, the Judiciary and others.

Jacmel, a town near the ocean known for its arts and French colonial architecture, was hit particularly hard by the earthquake, with an estimated 70 percent of homes damaged or destroyed; the town also suffered the effects of a small tsunami.  “This school inauguration is an important milestone,” Ms. Victor said, “and we hope that in the coming years many more schools buildings in Jacmel will be seismically upgraded. University students dedicated to giving back to their community need to study free of worry and fear about safety issues.”