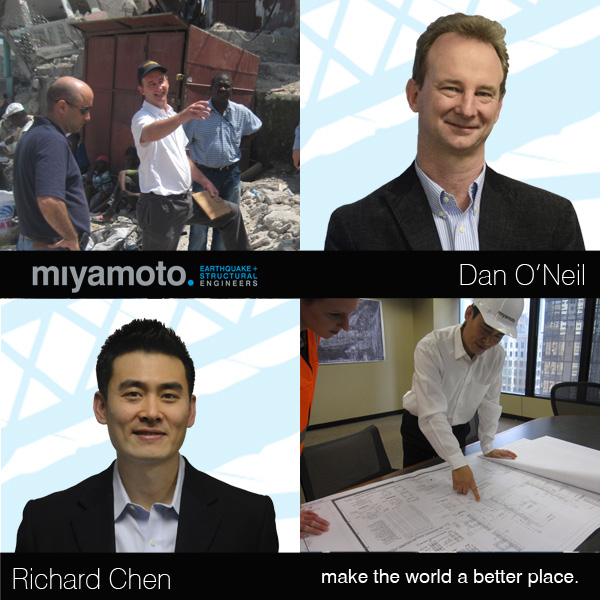 These two world-leading experts are strengthening Miyamoto’s vision of that earthquake risk reduction and reconstruction is as much about sustainable community development as it is about engineering.

O’Neil has worked with international nongovernmental organizations (NGOs) and donors for over 25 years, in such places as Haiti, the Dominican Republic, Vietnam and Ethiopia. He led PADF’s response to the Haiti earthquake and the reconstruction effort that followed.

Chen is a well-known and respected earthquake structural engineer with extensive experience in mission-critical, public and commercial projects, such as the University Gateway at the University of Southern California and the expansion of the Los Angeles Convention Center.

With his nine years of experience in Haiti, the earthquake greatly affected O’Neil: “The experience of responding to the Haiti earthquake was intense. Hundreds of thousands of people died not because the earth shook, but because buildings fell on them. With better construction, the death toll would have been dramatically less. I look forward to helping raise construction standards around the world with Miyamoto.”

On joining the Los Angeles office of Miyamoto, Chen says that it was the company’s mission to make the world a better place and the “opportunity to improve the lives of people” that inspired his decisive move.

At Miyamoto, O’Neil is leading Washington, D.C. and Latin American efforts, and is coordinating with international developing communities globally. O’Neil shares “I love what I have done with PADF and am very excited as to what I can do with Miyamoto”, he says.

Christopher Coderre, Superintendent with Clark Construction says about working with Chen; “Richard is a rare find in that he not only possesses the requisite knowledge in his engineering field to be exceptionally great at what he does but he also maintains fantastic relationships with his clients.”

Miyamoto has grown over 100 percent in the past four years, working on mission critical, commercial and public projects in California, Japan, New Zealand, Haiti, Italy, Turkey, the Philippines, Romania and Thailand. Miyamoto is a winner of The Zweig Letter Hot Firm Award for 2012.